Sometimes a preconceived notion can just blow up in your face! Thinking that it might be interesting to have an “ashram experience” & do some yoga for a couple of days, my dear husband only agreed to my whim as long as he didn’t have to participate. “Not a problem” was my response, we made a booking & off we headed to Rishikesh, the “Yoga Capital of the World”. This place is yoga central with yoga studios & teaching centres everywhere; the International Yoga Festival is also held here for a week each March.

Now Rishikesh may be familiar to some of you for another reason. Back in the late 60’s the Beatles followed Maharishi Mahesh Yogi to his ashram in Rishikesh to learn transcendental meditation. They lived at the ashram (now known as the Beatles Ashram) for several weeks writing music, studying TM & writing most of the songs on their “White Album” & a couple for the “Abby Road” album.

Anyway, back to the yoga story. We arrived at the ashram & thinking we were checking into the usual hotel-type reception. We walked in, gave a big “HELLO” only to be quickly told “SHHHHH” & directed to a sign indicating “SILENCE”. To boot I was scolded, not once but three times by a security guard, sadhu & receptionist for my bare arms/legs & told to cover up (I was less than impressed by this time & wondered if they thought I could just snap my fingers & have a new outfit materialize!). Who knew that dressing modestly meant head to toe – there was certainly no mention of this on the website. A bit shocked & taken aback we looked at each other, shrugged & I whispered to Bob “not feeling the good vibes here”. We were directed  to our small room, bare bones, cell like – hard twin beds, a desk, chair, bathroom & the “SILENCE”. “What no TV”, whispered Bob, “geez even the inmates have TV in segregation”.

Well the list of “rules” kept growing. Long story short, we (I) didn’t plan on a monastery experience, I just wanted to do yoga.  I told Bob if I ever get a genius idea like this again to give me a shake. We stayed the night & checked out (escaped) early the next morning, realizing that we are definitely not ashram material. I cut my loses & unfortunately didn’t get to do any yoga – I’ll stick with Anna at GoodLife. 😀 Oh well, another lesson learned – in retrospect it is all quite humorous now, but at the time…

Recovering from this misadventure, we quickly rebounded & had ample chance to explore the area & even got a glimpse of the Beatles ashram, now abandoned & overgrow by the forest.

Sitting in the foothills of the Himalayas, aside from yoga, Rishikesh is considered one of the 7-holy Hindu places in India, with pilgrims visiting the source of the Mother Ganga to do penance. An interesting aside, the whole area is designated vegetarian & alcohol free due to this.

Water from the mountains flows into the Ganges River, so much cleaner than the grossly polluted water we saw further downstream in Varanasi. Two jhula (suspension bridges) cross the river, Ram Jhula & Lakshman Jhula, with the temples located on the east side. We once again saw people bathing along the ghats & collecting Ganges water to take home. Contradiction abounds in India & this place is no different. Aside from the pilgrims, this is also a backpackers haven with a huge outdoor (trekking, bungee jumping, white water rafting) business happening here. Jeeps are continuously shuttling those eager for adventure from one location to another non-stop.

With the Holi Festival & Easter weekend the town tripled in size which surprised us, it was chaotic, who knew Hindus celebrated Christian holidays, with an extra long weekend to boot! It time to move on & we decided it would be interesting to head deeper into the Himalayas, adding another check-mark on Bob’s bucket list. 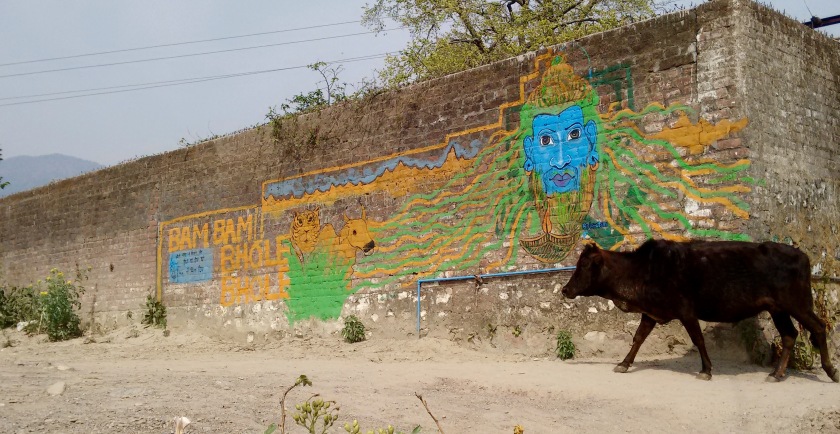 Note: The wifi has been really poor since the last post, so haven’t been able to post this blog for week.