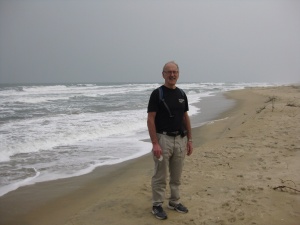 January 21st – Bob’s birthday! We started the day off with a delicious bowl of Pho  Ga (pronounced Fa) for breakfast. This is the traditional Vietnamese soup that is found in almost every restaurant. Biking to the beach was next on the agenda, so we rented bikes & headed out of Hoi An, past the rice paddies & lush gardens to Cua Dia beach, some 5 kilometres from our Homestay. The beach goes on forever, was relatively clean, quite deserted & had numerous basket boats waiting for the hoards of tourists who are no doubt elbow to elbow on warmer days. A walk was in order & the crashing waves were enjoyed while discovering some very interesting artifacts no doubt washed ashore following the recent typhoon.

We continued on our trip riding past the big beach side resorts & into small villages. We had read about the Hoi An Blind Massage & decided to look it up & treat ourselves to a full body treatment. Quang, the owner lost his eyesight from some left over explosives from the war. Along with is wife Thu, they are professionally trained

& work to support themselves & help other blind therapists to live independently.  We had the best 1 hour full body massage for a whopping $5.00 each!

The areas outside the town of Hoi An are lush with vegetable fields, ice paddies & herb gardens.  The rows of vegetation are so well maintained & the colours vivid.

After a 15K ride we headed back into town to explore the different districts & ended up in to day market. Quite interesting, needless to say.  I think the pictures will give you a good idea of the various wares the street vendors were hawking.

We finished off the day by having dinner at Secrets Garden, an intimate little restaurant with wonderful Vietnamese dishes. According to Bob, best birthday ever! 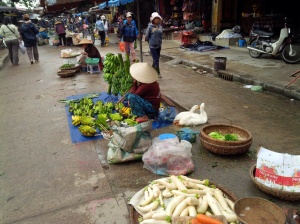 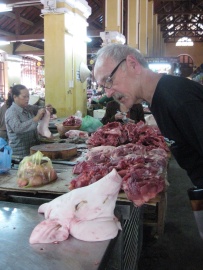 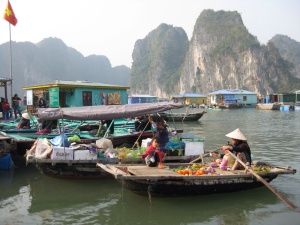 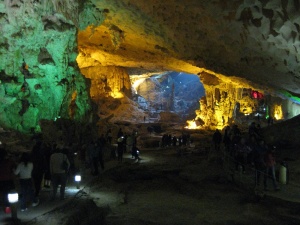 First impressions of Hanoi…beeping horns from chaotic hordes of scooters, buses & cars; electrical wires to challenge the best of Hydro One; lovely, smiling people; very walkable city, & a green light, when crossing a street, is just a suggestion! Yes, we have survived our first & second day in Hanoi & are loving it!

Jet lag was not in the vocabulary & we hit the road eager to immerse ourselves into the city vibes. Our accommodations in the old quarter proves very central to several must see sites such as the Ho Chi Minh Mausoleum, Army Museum, Waterpuppet Theatre & the Hoa Lo prison (aka Hanoi Hilton) where several US airforce pilots, including Senator John McCain, were interned during the VN war. Needless to say, Bob was less impressed with the prison accommodations!

Our first afternoon was spent with Quynh & Viet Ang, two university students with the “Hanoi Kids”. This student run organization provides opportunities for students to practice their English while providing pro bono tours to folks such as ourselves. What a great time we all had learning from each other. They loved the mittens we gave them as a token of our appreciation & I now have two new friends on Facebook!

Today we met some great fellow Canadians from Saskatchewan & had a great time wandering around viewing the sights together. We are following similar routes through SE Asia, so here’s hoping we run into each other again in our travels.

Tomorrow we head to Ha Long Bay for an overnight on a VN ‘Junk’. We will update our post after this next adventure.

Timing is everything and while we have done our fair share of travel, strapping on a backpack and hitting the road without a fixed itinerary brings a sense of anticipation and exhilaration. Given this, one week from today, Bob and I will add another check mark on the bucket list and begin our journey as ‘flashpackers’ to South East Asia! For those of you who are not familiar with the term flashpacker, the following pretty much sums it up –

“a flashpacker shares some of the characteristics of a backpacker: a sense of independence, no fixed itinerary and relatively long periods of travel to more exotic and far-flung destinations. Whereas backpacking is traditionally associated with budget travel and destinations that are relatively cheap, flashpacking has an association of more disposable income while traveling and has been defined simply as backpacking with a bigger budget.”

Our journey begins in northern Vietnam , we will travel down the coast to Ho Chi Minh City (aka Saigon) then on to Cambodia and finally Thailand. Needless to say the Canadian winter won’t be missed and we are more than excited for the opportunity to experience new and different cultures, foods and adventures. Yup, no bug infested hostels for this girl…although I do reckon a few unknown ‘creatures’ will be encountered along the way…stay tuned!