We got a tune in our heads and just couldn’t shake it – “We’ve Been Through the Desert in a Car With No Name…..”, okay so we’ve change the words of the song by America (circa ’71 for those not in our vintage) just a wee bit. Regardless, San Pedro de Atacama in Norte Chico (Northern Chile) is a place like no other and is definitely a backpacker and adventure tourist haven for those crossing the border from Argentina and Bolivia. Adobe buildings, desert, sand dunes, salt flats, mountains, lagoons, volcanos with a bevy of natural wonders all tied up with a multicultural vibe is what we found there. 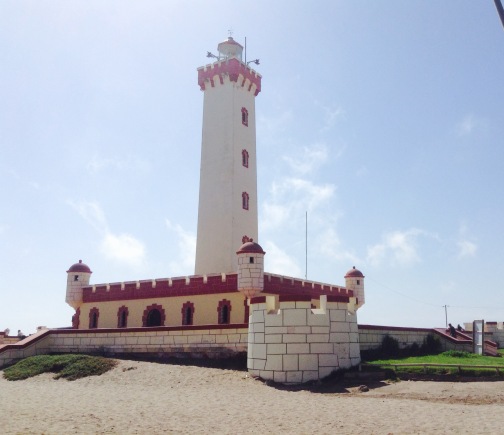 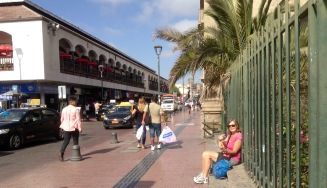 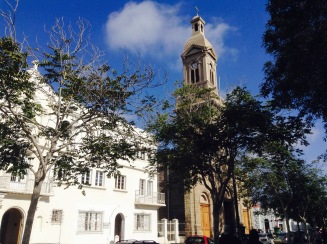 Contrary to what we’re familiar with, heading north means hotter, drier weather and of course we couldn’t pass up experiencing the most arid desert in the world. Our sojourn to the north began in La Serena, an ocean side town with beaches, lovely neoclassical buildings, 30 plus churches and more statues paying homage to dignitaries than we could count with its major claim to fame as being the second oldest city in Chile.

Just south of La Serena is the port town of Coquimbo. The hallmark here, providing a remarkable viewpoint of the bay and beyond, is the “Cruz Del Tercer Minenio”, (Third Millenium Cross Monument) a huge cross 83m high and 40m wide built in 2000 on El Vifia hill 197m above sea level. The cross, with a lovely church and museum built at the base, commemorates the birth of Christ 2000 years ago and was dedicated/blessed by Pope John Paul II. 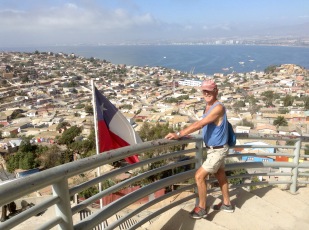 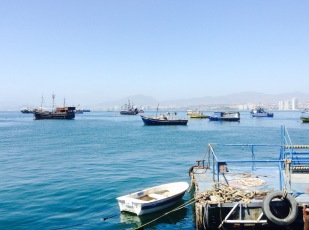 Staying half-way between the two cities we walked to both towns on consecutive days, 6km in either direction, (one way), and of course ended up doing the very steep uphill climb to the cross. We later found out later it may not have been the most savvy move on our part since the neighbourhoods are not considered safe for tourists. Bob even made a comment at one point that the graffiti looked like “gang tagging”. Guess our guardian angels were being tested that day!!

A couple of hours inland found us in Valle de Elqui, home to fertile fruit farms and origin of Chile’s national drink “Pisco”. This is the only region where this “alcohol”, similar to brandy, is produced and is crafted from Muscat grapes. Since we are always up for a new experience we headed to Alba Winery, a 150 year old family run business and were fortunate to have a private tour followed by tastings of the different qualities produced. We learned the grapes are first made into wine then double distilled in copper stills. After 12-24 months the pure alcohol is mixed with ultra pure water to adjust the alcohol level to 40-45% proof. The popular cocktail made from the alcohol is called “Pisco sour”, delicious and definitely has the potential of being lethal! And yes, one of the finest vintages has found its way into our bag for the journey back home. 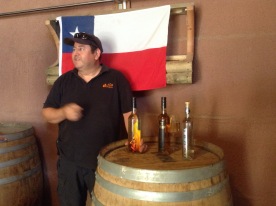 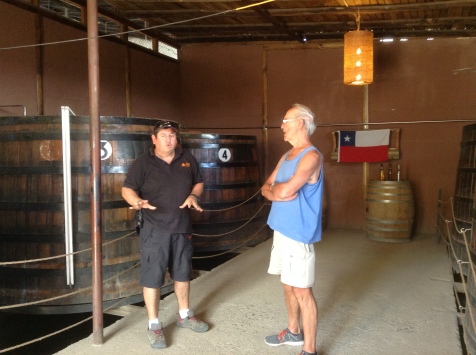 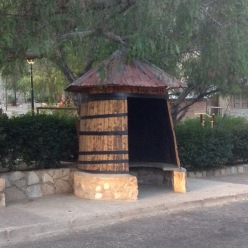 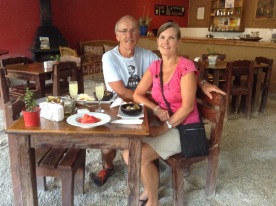 The area is also known for the cloudless clear nighttime skies and houses some of the largest astronomical observatories in the world. We went to a night observatory and spent 3-hours gazing at the constellations and stars we don’t see at home, i.e., the Southern Cross and Orion. What an interesting and educational evening, plus an added bonus was getting a great telescopic photo of the moon with our iPad.

Heading further north by air, we landed in Calama, home to the world’s largest open pit copper mine (we regret we didn’t book a tour), rented a car and drove 1-1/2 hours, through the desert, to the oasis town of San Pedro de Atacama. 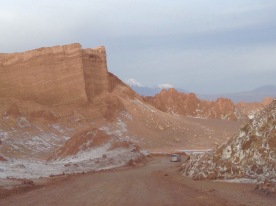 The Valle Del La Muerte (Death Valley) is aptly named as nada grows there, but does provide a great lookout point of spectacular rock formations and volcanos. Another big hike we enjoyed was at the 3,000 year old archeological site of Pukará de Quitor. The Pukará is a set of ruins of one of the last strongholds of the Atacameño people in their fight against the Spanish. About 3 km from San Pedro, the fortress, or what remains, is relatively easy to reach, but you can also choose to climb all the way to a viewing platform. Reaching the lookout after a 1-1/2 hour steep uphill hike, in the mid-day sun no-less (mad dogs and English men), we were treated to a very nice view of the valley in which San Pedro in located.

Climbing to the top 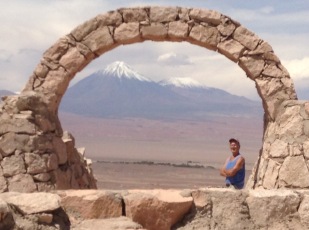 Lagunas Miscanti and Mininique are 110km southeast of San Pedro and are called Lagunas Altiplanicas since they are 4100m (~13,600 ft) above sea level. The two lagunas, part of the National Flamingo Reservation, were once one big lake, but have been separated by a lava flow from an eruption of the Mininiques volcano. The ice cold beautiful turquoise lakes are fed by subterranean waters and are home to Chilean flamingos, small ducks and Vicuña, a distant relative of the alpaca. It was refreshing to head to the mountains after driving the long straight roads in the desert heat, climbing gradually up the mountain sides. We lucked out and managed to enjoy the area in relative solitude, a small gap between the van loads of tourists that invade the area daily. It was only when descending these mountains did you realize how high we really were, especially when Bob put the car in neutral and coasted down hill for over 20km. 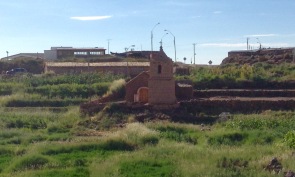 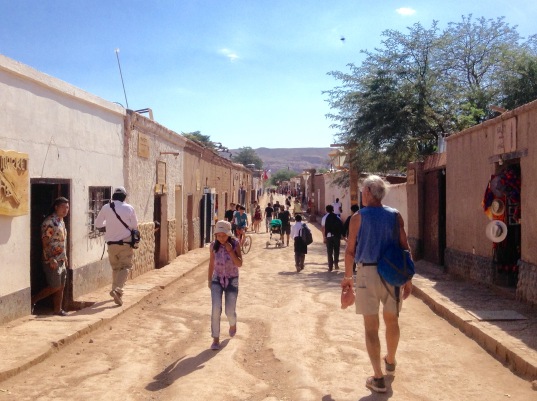 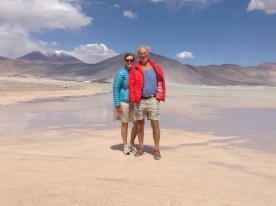 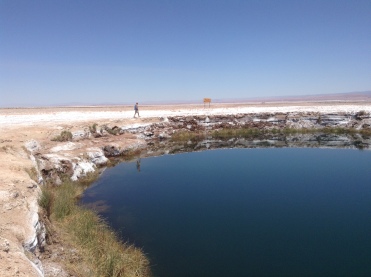 We once again experienced salt flats, “Salar De Atacama”, however while intriguing, were not as spectacular as those we saw in Argentina. All in all we did a lot of hiking and off road travel in this area, saw most of the must see sights, considered the bumpy roads our “Chilean massage” and thankfully didn’t rip the oil pan out our our little rental.

Our return plane ticket found us in the big city of Santiago. Given that a huge majority of Chileans live here, our taxi driver described it best, “Santiago is Chile”!