Who knew the annual celebration of “Cinco de Mayo” (5th of May), and the thousands of streets throughout Mexico named the same, originated in Puebla. As recorded by the historians, the Mexicans defeated French invaders in the Battle of Puebla in 1862, a rare Mexican military success. Unfortunately the French took back Puebla the following year and occupied it unti 1867. This is also the birthplace of the Mexican Revolution-history abounds here! 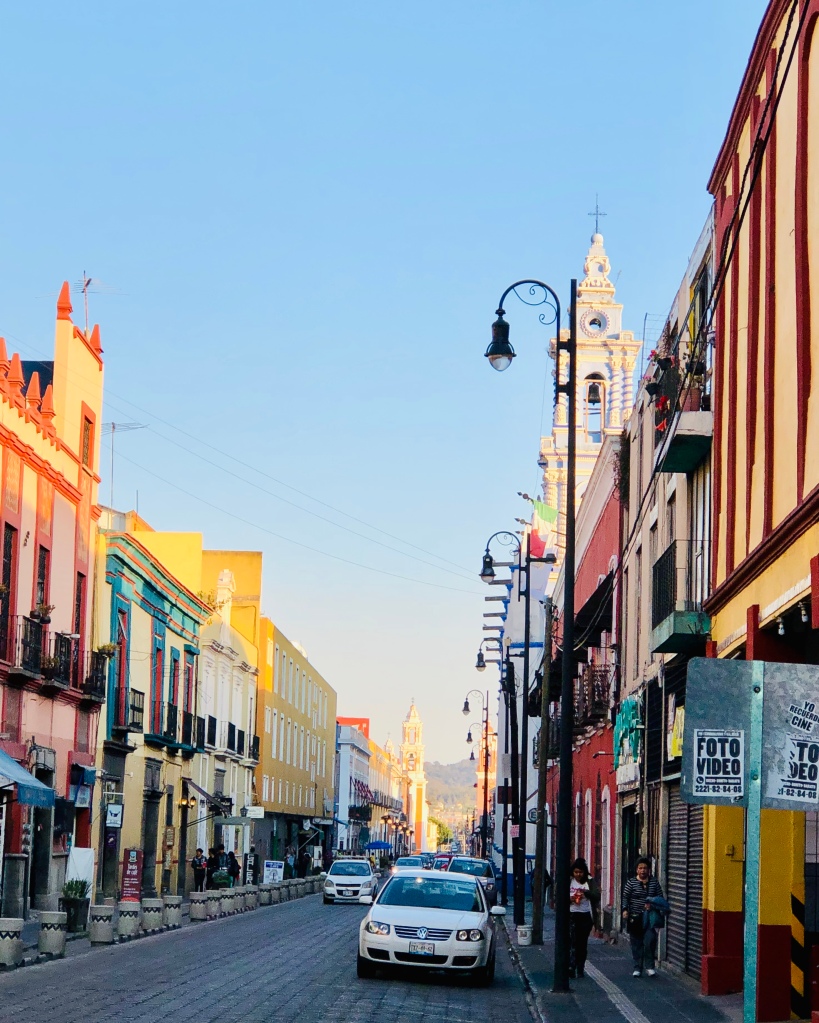 Puebla is sometimes referred to as the “City of Street Lights” due to the numerous decorative street lamps crafted by the French. The French legacy can also be seen in the city’s elaborate wrought iron balconies, azulejos (painted ceramic tiles) on many buildings, and the fine crystal chandeliers adorning historic buildings. Very colonial with a wonderful historic center, we were actually quite taken with the city and loved wandering  the streets and exploring not only Puebla but also nearby Cholula with its ancient pyramid and still active Popocatepel volcano. 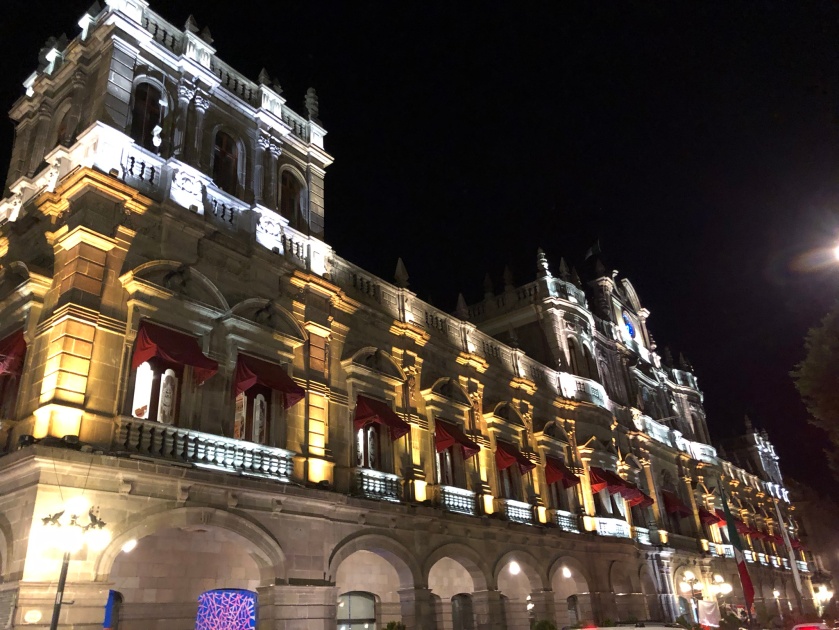 It seems we are always surrounded by churches, some more ornate than others and often wonder how the upkeep can be afforded.   There is no lack of several notable ones in this city.

We started off with the huge and impressive Puebla Cathedral which takes up the entire block on the south side of the zocalo. The cathedral is actually featured on the blue M$500 bill.

Templo de Santo Domingo is famous for its stunning Capilla Del Rosario (Rosary Chapel) and known as the Eighth Wonder of the World. One of the most glorious examples of Baroque architecture, the gold appearance is actually gold foiled plaster and carved stone. We had to make a second visit to see the chapel since a wedding was about to take place the day of our first visit.

The “Virgen del Carmen” church was just just around the corner from our Airbnb. Beautiful ceramic tiles adorned the exterior.

February 2nd  may be Groundhog Day in the Canada, and also our son Michael’s birthday, but in Mexico there is a completely different celebration on this date. This is the religious holiday known as Día de la Candelaria (or Candlemas in English). The tradition recalls that forty days after the birth of Jesus, Mary and Joseph took the child to the Temple to present to the priests.

Throughout Mexico on this date, people dress up figures of “Nino Dias” or the Christ Child in special outfits and take them to the church to be blessed, followed by celebrations with family and friends.

As chance would have it we were in Puebla on this feast day and were curious seeing so many people carrying dolls into a church, so we followed them.  Seeing our curiosity a kindly man approached us after mass to explain what was going on and the tradition behind it. He then told us to head to the zocalo as we weren’t in a particularly safe part of town! 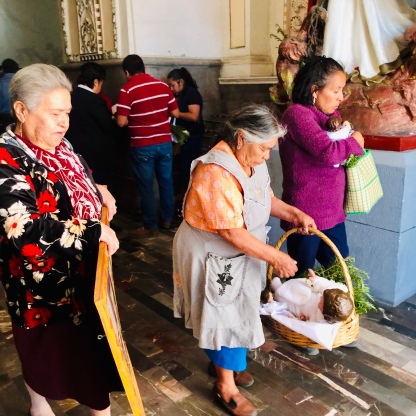 Women with their nino dias

Posing for family pictures outside the church

The Centro Historico, a UNESCO site,  has many colourful streets. Although not its official name, Candy Street is lined with pastel storefronts with traditional sweets and cookies displayed in glass cases. Many shops also sell the handmade and painted Talavera pottery crafted exclusively in the region. Authentic Talavera is distinguished from imitations by the raised design and gloss of the finish. And yes, I am now the proud owner of one such piece!

The Barrio del Artists or Artist Quarter with its tree lined pedestrian walkway is dotted with quaint cafes and studios. Works of art and open galleries are intertwined with small market stalls. Just around the corner we found a small plaza with several musical groups mulling about and practicing for an annual competition. 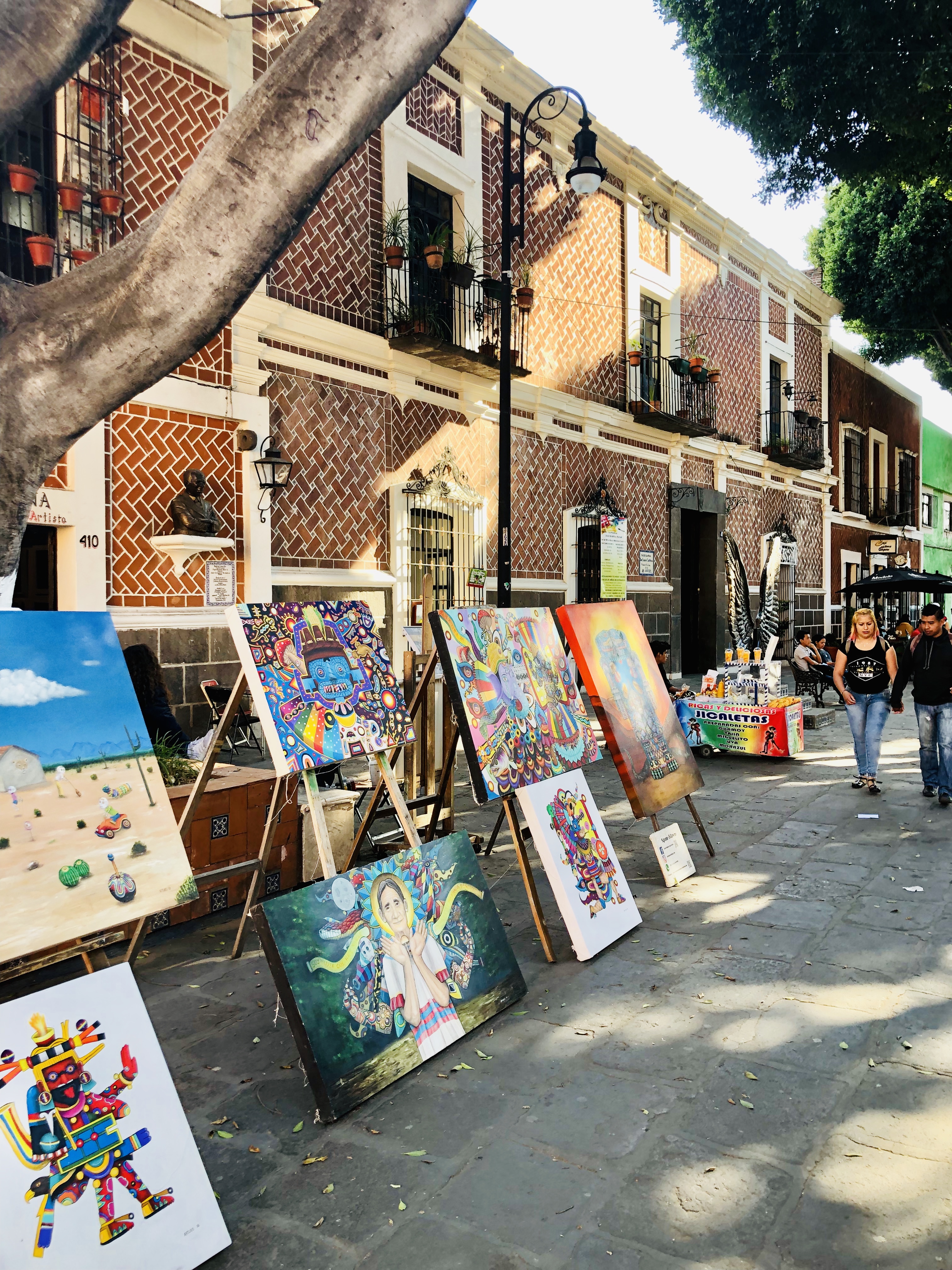 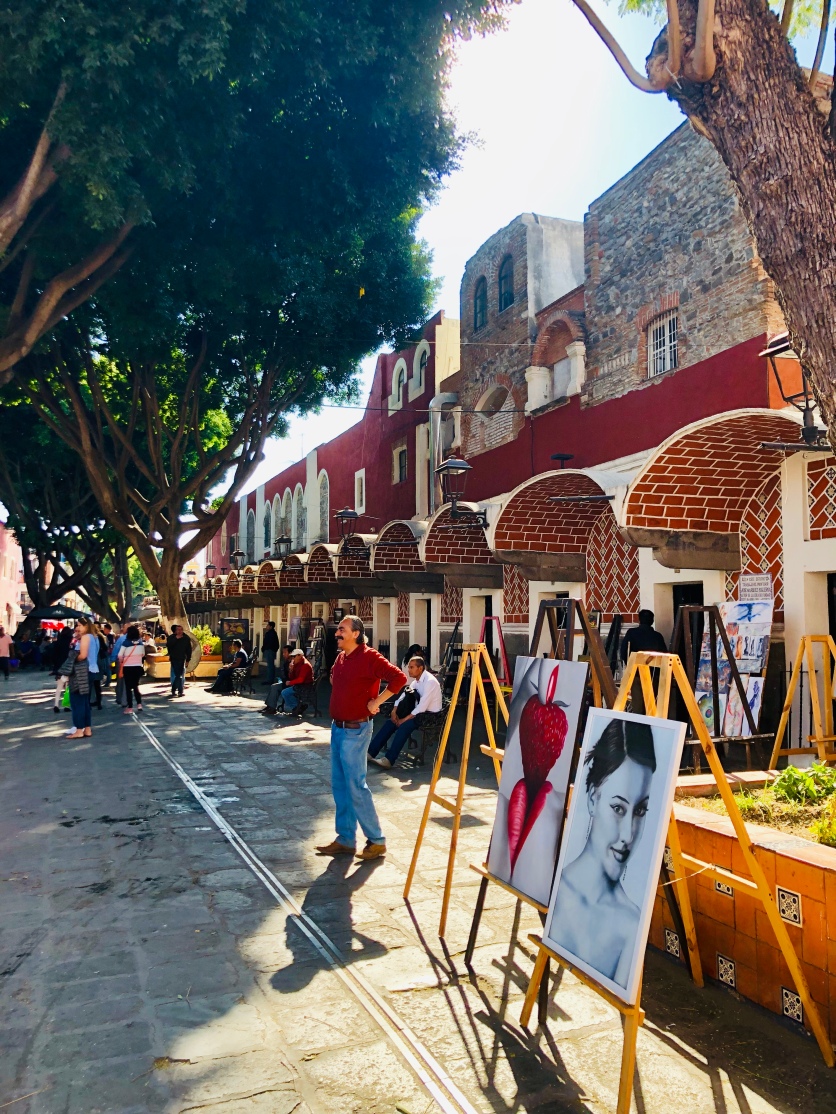 We couldn’t miss a visit to Biblioteca Palafoxiana, the first and oldest public library in the Americas. The library’s original ornate shelving holds the intact collection of books from the Spanish Colonial period. 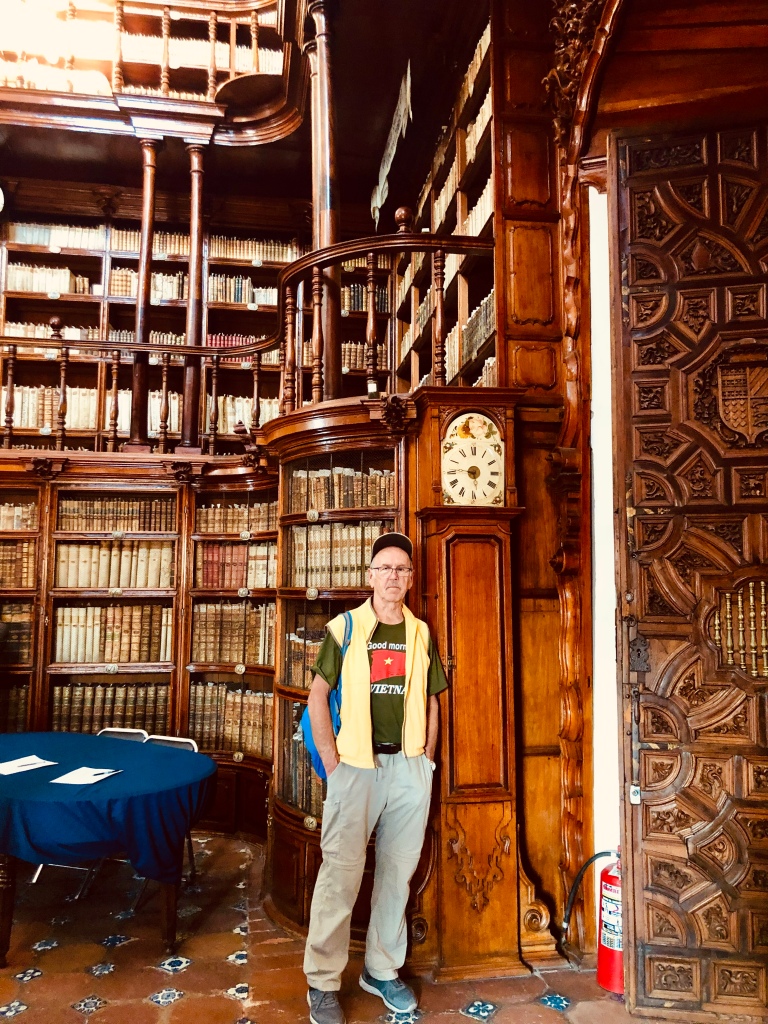 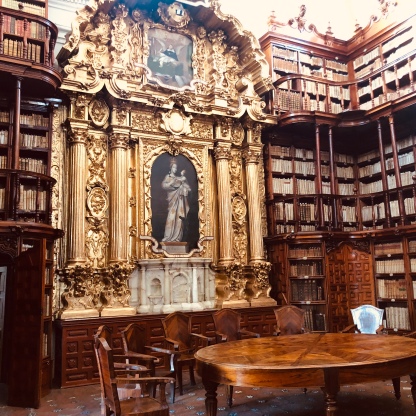 A day trip to Cholula to see Piramide Tepanapa, the widest pyramid ever built, yes wider than any in Egypt, couldn’t be passed up. Unfortunately this pyramid, dating back to 600 AD, has been badly neglected over the centuries and one would be hard pressed to recognize it as such. The south side of the pyramid has been excavated and there is a network of tunnels inside.  Today, only about 800 meters of these tunnels are open to the public.

What is amazing though and the towns biggest drawing card is the Santuario de Nuestra Señora de los Remédios. This church tops the pyramid and provides a great panoramic view.

We were the only visitors creeping through the tunnels at the time of our visit, kind of creepy especially when our cab driver told us there were several small earthquakes the day previous.

Serendipity was again at play during our Puebla visit. Bob’s sister Martha sent us an invitation for a vernissage she received from fellow artists/friends from Montreal. She suggested we drop by to say hello on opening night. We represented Canada that evening, met some lovely, very talented artists and of course enjoyed the wine and hors d’oeuvres. 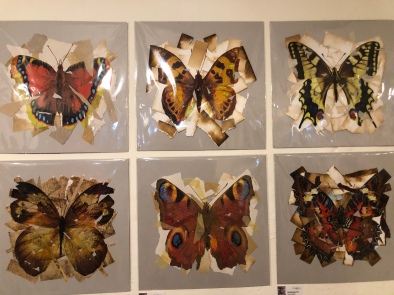 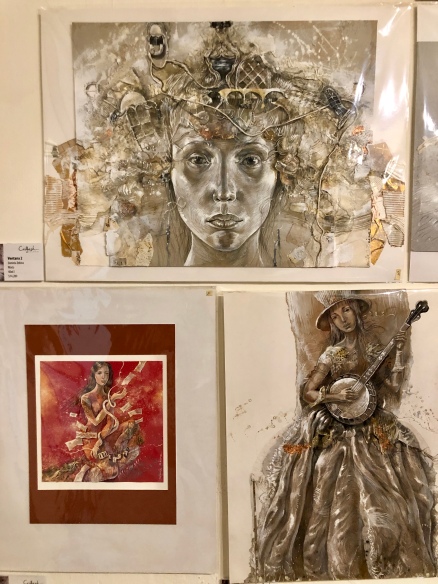 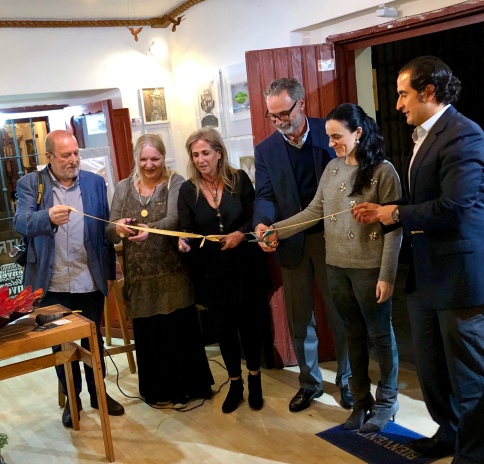 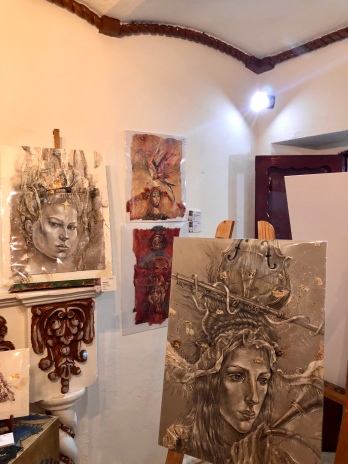 We had planned to head further south towards Chiapas and San Chrisobel but a nasty cold I couldn’t seem to shake was slowing me down so we decided to head to the coast. Nothing like warm ocean breezes, endless sunshine, and heat to cure what ails you. Back to Mexico City and only a short flight away – Hola Hualtuco!

7 thoughts on “Puebla, Cholula and a Vernissage”