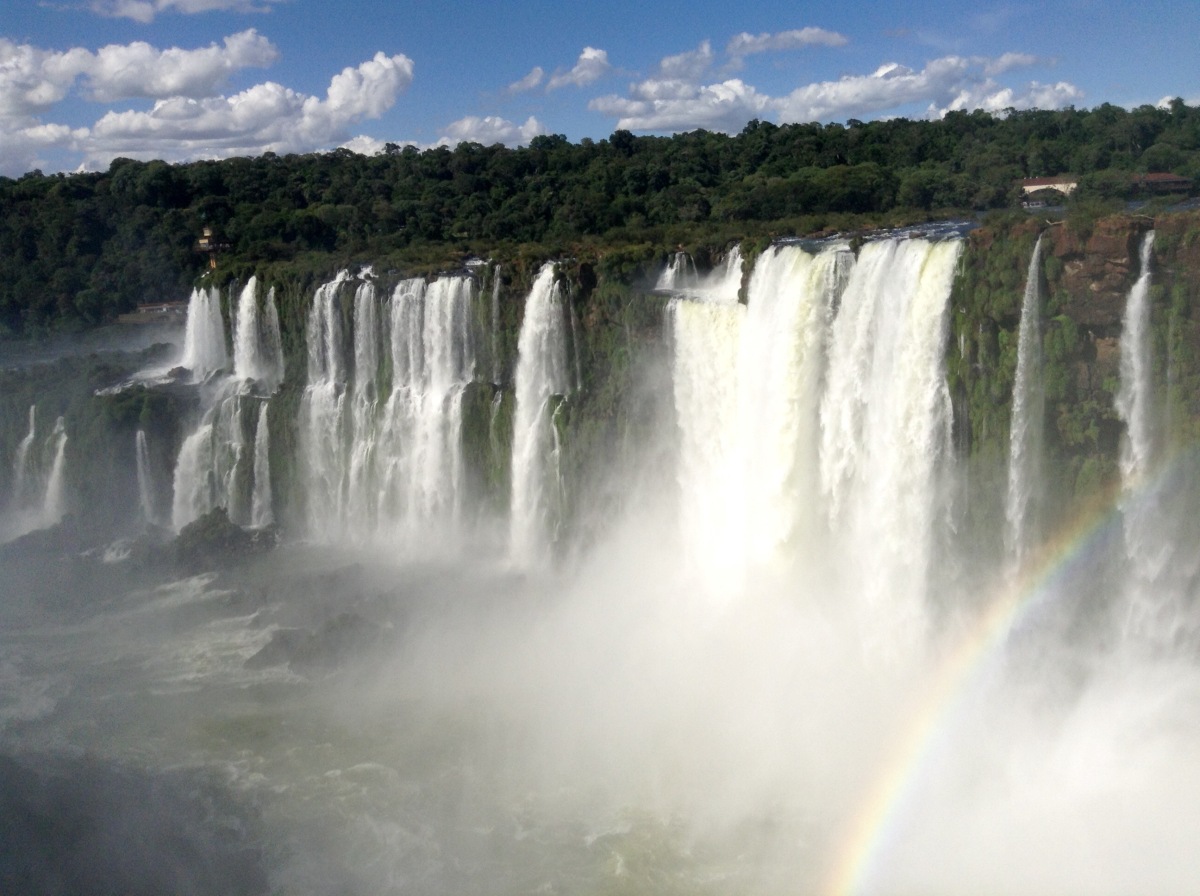 Our next stop on the journey was a four-day visit to Montevideo, Uruguay. What we thought was a one-hour ferry ride from Buenos Aires turned into three, a slight miscalculation on our behalf due to our translation ineptness when booking online. Oh well, the sun was shining, weather warm and the ferry comfortable.

Montevideo, the capital of Uruguay, is a much smaller version of BA and is home to half the country’s inhabitants. The revived colonial quarter, know as  Ciudad Vieja (Old Town), has a pedestrian friendly grid of narrow streets dotted with plazas, restaurants, bars and shops. It is a port city with the trendy port area bustling during the day, however the carpets are rolled up around 6:00 pm and tourists warned not to venture into the area due after dark due to the petty crime.

Tourism is a major contributor of the country’s economic stability. The interior has rich farmland to support various crops and of course the lucrative beef industry, a major export. 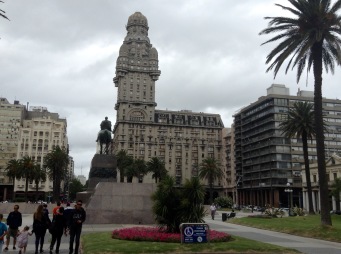 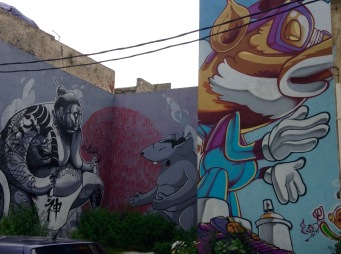 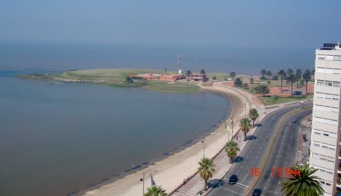 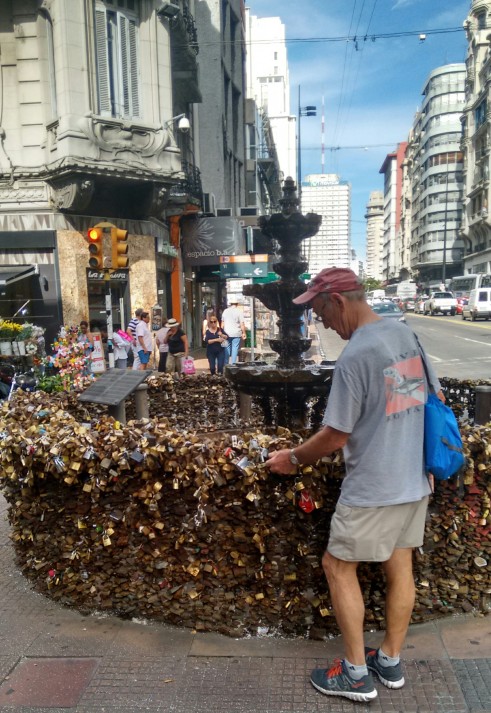 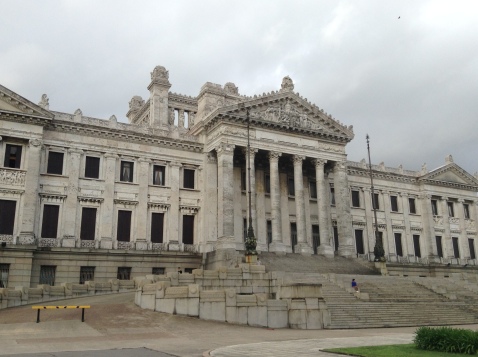 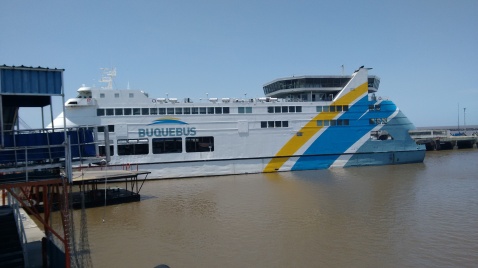 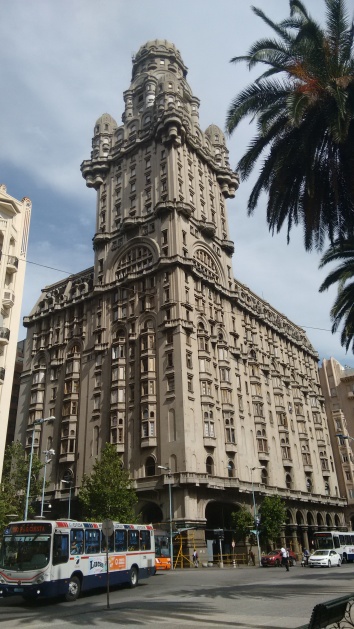 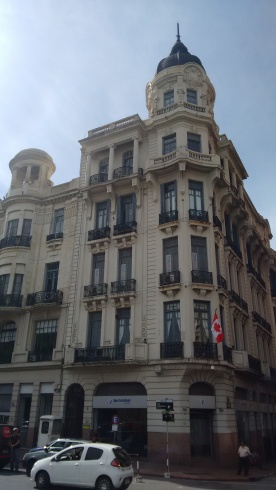 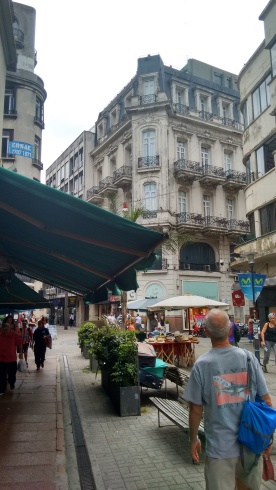 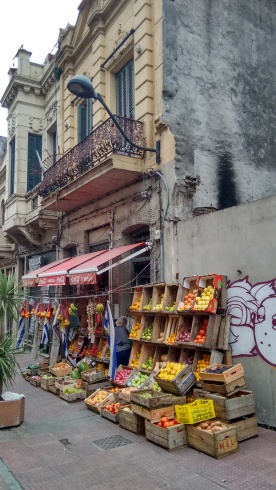 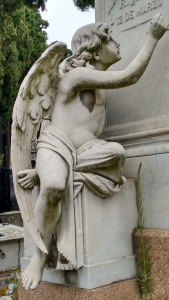 Several beaches lie on the River Plate along a 30-km coastline and is connected with a wide, pedestrian/bike friendly circuit called La Rambla. While the historic area is beautiful, many areas appear unkept and dirty with excessive graffiti disfiguring the buildings. Even the cemetery, no doubt once grand, was sadly neglected. The economy has also been suffering – high inflation and less tourists, no wonder we found it much more expensive than BA. The one thing we did find quite interesting is that marijuana is legal in Uruguay. People smoke it openly on the streets, although we didn’t see many doing this. The head shops advertise and sell many different varieties of weed, seeds, paraphernalia, etc. and no one seems phased one way or the other. Life goes on! 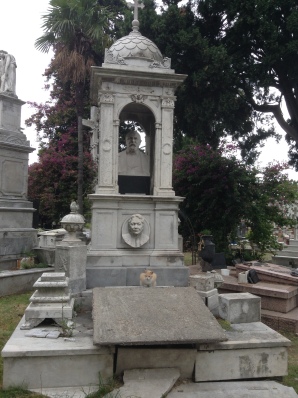 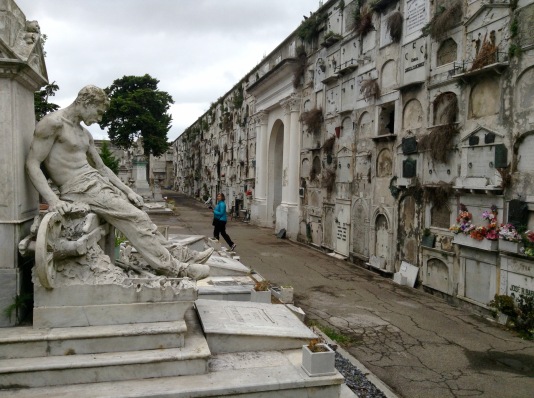 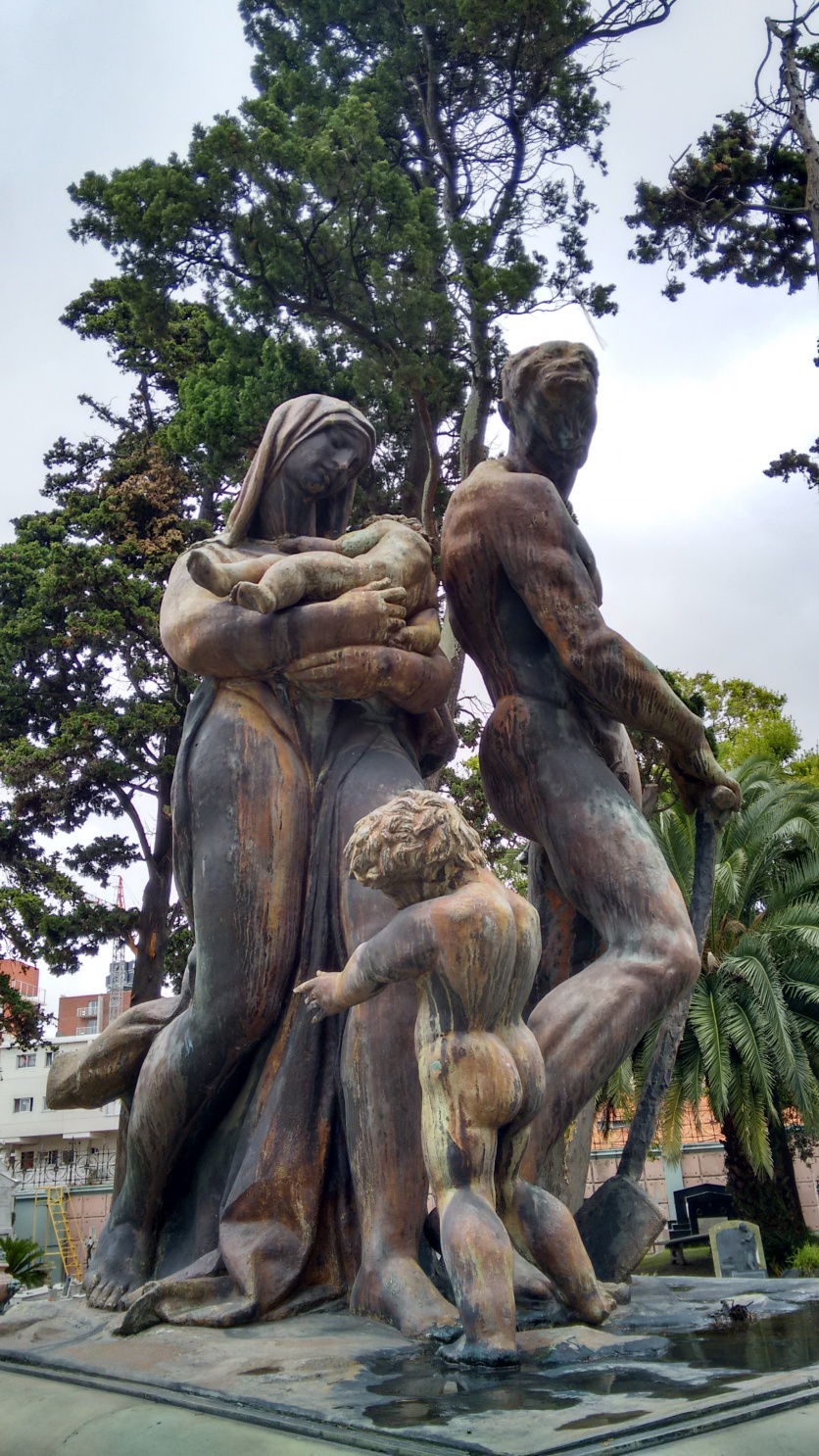 We headed back to BA and with a bit of hesitation (given our past experiences) took an overnight bus to Puerto Iguazu, home of the famous Iguazu Falls. Bus travel is one of the main methods of transportation in the Argentina and offers different classes based on seat type. We bit the bullet and opted for first class with seats, (similar to airline business class), that fully recline to a bed, each seat has a monitor with a choice of current TV shows and movies (in English no less) and we even had a descent dinner that included wine! (Miri and Yossi, you would be very impressed). Our 16-hour journey was offset by watching movies, our current favourite show, “Game of Thrones”, some shut-eye and we arrived the next day refreshed and none too worse for wear.

To say the falls are magnificent really falls short in describing their magnitude and pictures just don’t capture the experience. These monster, roaring falls are a UNESCO World Heritage site and considered one of the new Seven Wonders of the World. An added benefit is the setting: the falls lie in a large expanse of national park, much of it rainforest teeming with unique flora and fauna.

The Iguazu Falls are arranged in a way that resembles a reversed letter “J”. The border between Brazil and Argentina runs through the “Devil’s Throat”. On the right bank is the Brazilian territory, which has just over 20% of the falls, and the left side are Argentine, which make up almost 80% of the falls. The system is made up of 275 waterfalls, “cataratas” in Spanish, depending on the season, with the tallest waterfall called the Devil’s Throat. It drops more than 80 meters into a milky abyss creating a permanent cloud of mist with shimmering rainbows. Putting this all into perspective, Iguazu Falls is almost twice as tall as Niagara Falls and rivaled only by Zambia and Zimbabwe’s Victoria Falls, which is taller at 108 meters. It’s nearly three times as wide as Niagara Falls and significantly wider still than Victoria Falls. The amount of water pouring from these falls to the Iguazu River is equally staggering. 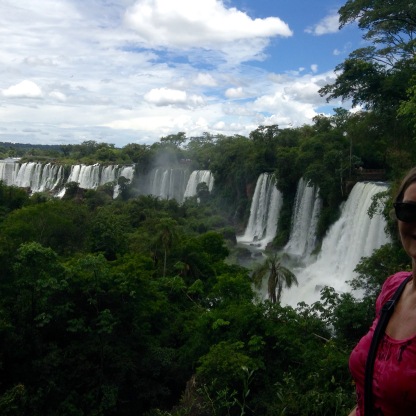 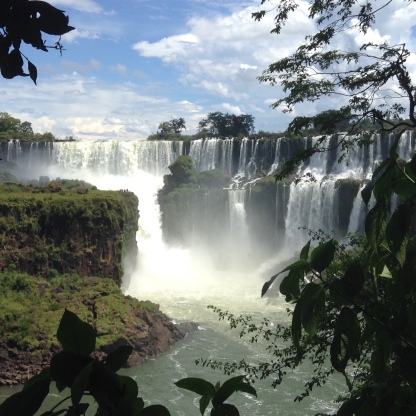 The Argentinean side offers a walking route along a series of boardwalks that take visitors close to the action. With the majority of the waterfalls located here, there’s plenty of opportunity to get up close and intimate with the falls getting soaked in the process. We took all five pathways spending several hours hiking from one series of falls to another. We hopped a local bus the following day to see the Brazil side of the falls, which apparently offers a more panoramic view, but got turned away at immigration, (or kicked out), no visa. Another lesson in not believing everything you read! 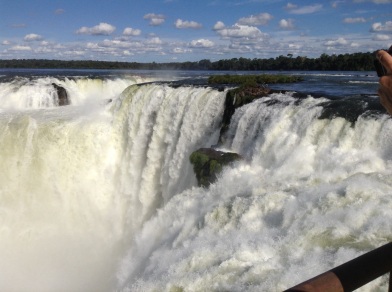 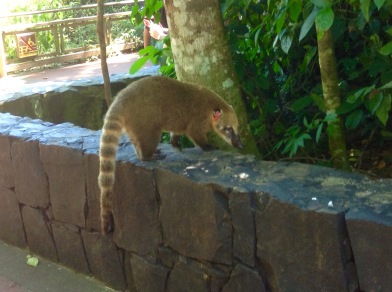 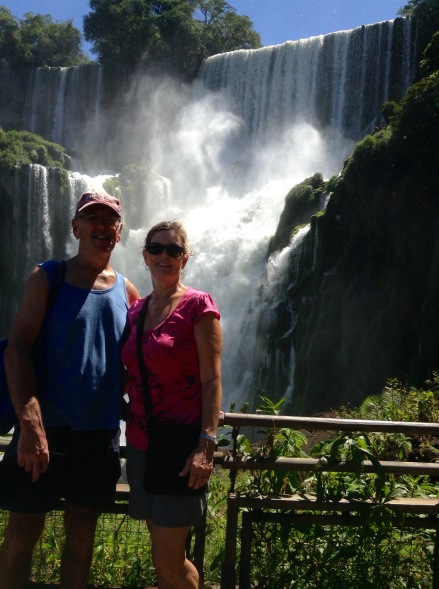 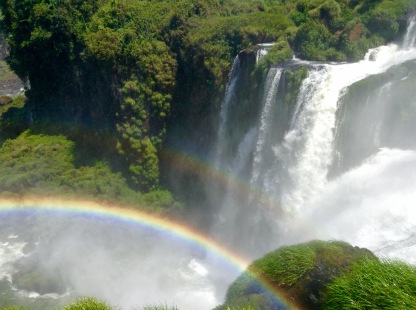 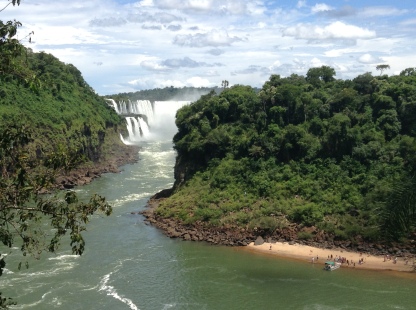 We ended up staying four days in Puerto Iguazu in order to catch a 1-1/2 flight to Salta, our next destination. Cashing in some air mile points saved us a 24-hour bus ride! Did we mention how vast this country is?

To fill in the extra day waiting for our flight we headed off again on a local bus to the Wanda Mines, known for open-pit mining of gemstones such as quartz crystals, amethysts, agates and topazes. The little town called “Wanda”, (pronounced Vanda), is about 40 km from Puerto Iguazu and was founded by a polish immigrant who escaped Poland during WW2. He apparently named it after a polish princess who loved gemstones. We met a local man of polish descent while touring the mine; Bob was able to exchange some basic pleasantries in Polish/Ukrainian which thrilled the guy, the only common language between English and Spanish!

The first layer of gemstones were discovered in 1976 by a farmer tilling the earth. Needless to say he didn’t have to dig down too far to find the deposits and is no doubt laughing all the way to the bank! We had a great geology lesson and tour and as hard as it sounds, I was able to refrain from parting with any argentine pesos, violet is just not a colour I wear often! 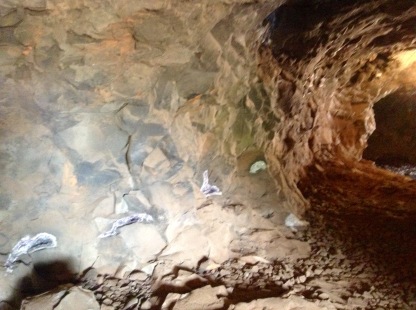 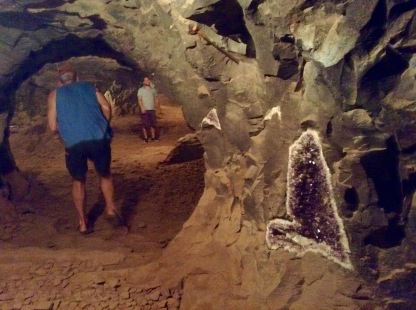 As mentioned previously, we are heading to Salta, a city located in the Lerma Valley, at 1,152 metres (3780 feet) above sea level in the northwest part of Argentina sitting at the base of the Andes mountain.

8 thoughts on “Uruguay vs. Argentina”