The first view of the Himalayas is spellbinding! Spending 10-hours on a train, followed by a 2-1/2 hour car ride in the middle of the night may sound crazy to most people, but the long trip was rewarded with vistas that we have no other words to describe but magnificent.

As mentioned previously, Bob wanted to see the Himalayas, so off we went to Dharamsala & the hill station, McCloud Ganj. It just so happens also that McCloud Ganj is the home of the Dalai Lama. There is a large Tibetan population in McCloud including many maroon-robed Buddhist monks & nuns (Marlow you would love it here). It was almost unimaginable that we were still in India with the Tibetan people, culture, food & handicrafts – it is actually likened to a mini-Kathmandu.

Driving up the steep mountain side in the middle of the night to an elevation of around 1800M, Bob kept saying he was seeing snow-capped mountains, I told him they were just clouds – wrong again! We had left a sweltering Rishikesh so it seemed unfathomable that we would be seeing snow. Finally arriving at our hotel, we crashed for a few hours of sleep; when we woke up & stepped out on our balcony we were awe-struck with our first view of the mountain range – absolutely breath-taking! Pictures just cannot capture the majesty & beauty. The elevation also afforded us with much cooler & crisper air, such a nice change, we even required our light jackets again in the evening.

There are great opportunities for trekking, be it long or short in this area. Our first day trek found us at ‘St. John in the Wilderness’ Anglican Church. It was Easter Sunday & we were welcomed to join the Easter service by the small community of Christians living here. Of interest we found a Canadian connection, the final resting place of the 8th Lord of Elgin & former Governor General of the “Province of Canada” – small world. On another day we did a steep hike up to Bhagsu waterfall with small temples scattered high on the mountain-side, havens for meditating monks.

Memorial for monks who have died by self-immolation 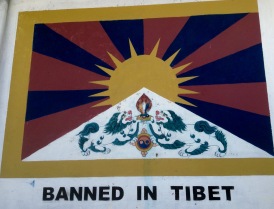 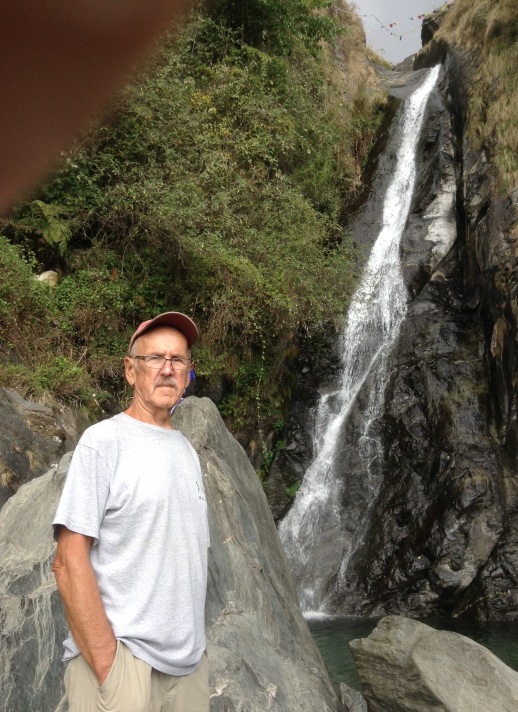 Photo gallery of monks who have self-immolated since 2009

Needless to say we visited the Tsuglagkhang Complex the site of the Tibetan exile community’s main temple & home to the Dalai Lama. Unfortunately we didn’t see his holiness, however it was interesting to observe life at the temple with the monks in lively debate sealing points of arguments with a foot stamp & theatrical claps of the hands. 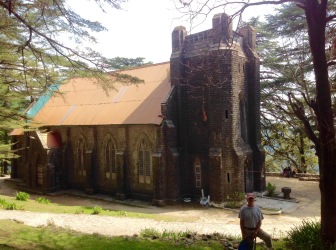 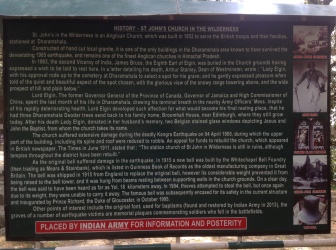 There was one last thing we (I) wanted to see in India, so we hired a driver to take us to Amritsar in the Punjab. Our niece Jenny sent us a YouTube clip earlier in our travels of a ceremony held each evening at the Attari & Waugh borders separating India & Pakistan, our interest was piqued. The only fly in the ointment was a suicide bombing that took place in Lahore, Pakistan which killed 70 people 2-days previously. Lahore is about 12 miles away from the border crossing, we were thinking of cancelling but no one really seemed concerned, so off we went. Besides what better time we figured, security would be on high alert!

Each evening a flag lowering ceremony is held at the border with much pomp & ceremony. The soldiers must be hand-picked since they are all very fit, well over 6′ tall, wear smart dress uniforms & turbans topped with fan-like plumes. The gates open & the performance begins just before dusk with lots of marching, stomping, chest beating & high-kicking, with the military of each side trying to outdo the other. Actually the high-kicking was phenomenal, we saw them actually kicking higher than the plumes on their turbans!

Amritsar itself is nothing to write home about, but it is home to the famous ‘Golden Temple’, the holiest religious place for Sikhs. The stunning gold temple is surrounded by water & ringed by a marble pathway. The water is thought to have healing powers so once again we saw public bathing., primarily by men. We visited twice, once during the day & again at night to see the lights-the place was packed both times. Protocol is strict, head covering is required, shoes/socks must be removed & feet washed in a foot bath before entering the complex. The lineup to get inside the temple itself was very long so we decided to forego the 2-hour or more wait.

Heading to the temple

Guards at the Golden Palace 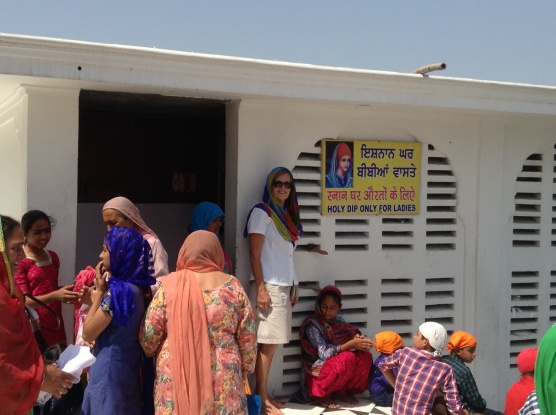 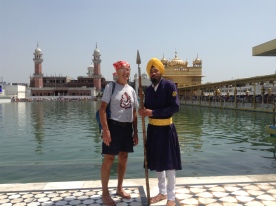 Reading from the holy script

Another train ride saw us back in New Delhi. We have such a good handle on the railway system now, a far cry from our first experience! We headed directly to the airport arriving in Goa a few hours later for the final days of our sojourn in India. Here we are enjoying the beach, relaxing & decompressing for the next few days before heading back to Mumbai to catch the long flight home.

You aren’t quite finished with us yet though! We plan to do one final blog giving you our final thoughts travelling India.

3 thoughts on “From the Himalayas to the Pakistan Border”