Arriving in Agra by overnight train, well before sunrise, we took the opportunity to head to the Taj Mahal to witness this magnificent monument greet yet another day. This is apparently the best time to view the Taj & our very first glimpse is breathtaking. We were awestruck with its absolute beauty & symmetry, casting a pinkish glow in the early morning light. Definitely worth giving up a bit of sleep & avoiding the crowds.

This famed mausoleum complex, built on the south bank of the Yamuna River & is one of the most outstanding examples of Mughal architecture which combines Indian, Persian & Islamic influences. We marvelled at this architecture in Delhi, but the Taj is the icing on the cake & agree it is the most beautiful building ever created. Taking 20-years to build, it is the lasting testament of love for Shah Jahan’s favourite wife (3rd of 3), Mumtaz Mahal, who died while giving birth to their 14th child.

Entering through a red sandstone gateway, you first see the translucent marble structure, elevated on a marble platform. The only backdrop is the sky, further emphasizing the grandeur. A reflecting pool leading up to the Taj is flanked by gardens, laid out with avenues of trees & fountains. As you get closer two identical looking red sandstone buildings, one a mosque & the other, thought to be a guest house, provide further symmetry to the grounds. There are several additional mausoleums on the grounds, including those of Shah Jahan’s other wives, and a larger tomb for Mumtaz’s favourite servant.

A  little bit of architectural trivia is always warranted in this blog, so here goes. The beautiful white marble walls are inlaid with semi-precious stones (jade, crystal, lapis, amethyst & turquoise) forming intricate designs in a technique known as “pietra dura”. The central dome or “onion” is 240 feet (73 meters) high, is surrounded by four smaller minarets & four towers on each corner. Light filters into the central dome through beautiful perforated, finely cut marble screens.

In accordance with Islamic tradition, verses from the Koran are inscribed on the arched entrances to the mausoleum, as well as numerous other sections of the complex. It is directly below the main dome that the Cenotaph of Mumtaz Mahal, an elaborate false tomb, lays with the Shah’s cenotaph to the side. The less elaborate main tombs (Muslim tradition forbids elaborate decoration of graves) are locked in the basement inaccessible to tourists.

While this love story is quite enchanting, there is a darker, less well know side. Some people are just doomed; the Shah’s third son (by Mumtaz) overthrew his ailing father for power placing him under house arrest in a tower at the Agra Fort. The Fort itself is very grand & while originally built as a military compound, it was later upgraded to a palace. Imprisoned & heartbroken, the Shah spent his remaining days with only a distant view of the majestic resting place he had constructed for his wife; when he died he was buried next to her in the mausoleum at the Taj Mahal.

One of many carved archways

Back to reality, Agra itself is a dirty, dusty town. Other than the Taj & the Agra Fort it has little else going for it, such is a shame really. Once you’ve seen these two tourist attractions, it’s time to get the heck outta Dodge!

Looking down on Fort courtyard 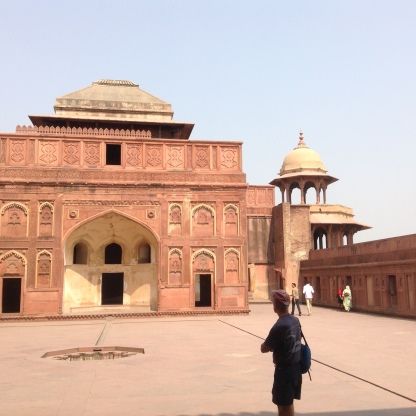 Our next stop was Ranthanbore for a jeep safari. The claim to fame here is a National Wildlife & Tiger Reserve. Well, the only tigers we saw were painted on the walls at the train station! So we decided to cut our stay short & head to Rajasthan, first stop Jaipur. 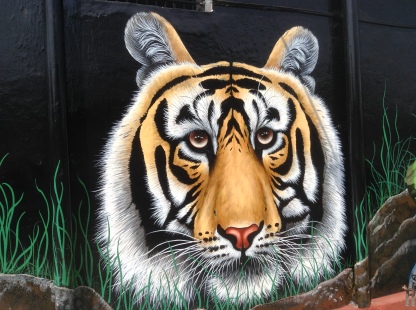 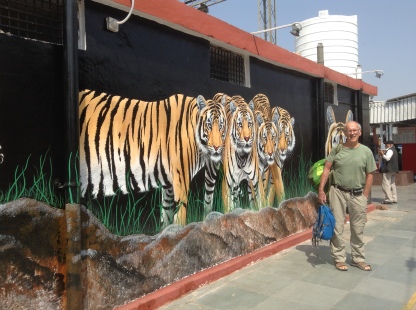 8 thoughts on “The Magnificent Taj Mahal”