One of the oldest, holiest cities in the world, Varanasi dates back to 1200 BC. Life & death collide head-on here with pilgrims coming to the River Ganges to wash away a lifetime of sins or to cremate a loved one. Regarded by the Hindus & Jains as one of the 7 holy cities; elderly people make the trek to Varanasi when closer to death in order to achieve nirvana/salvation. These ghats were originally built by Hindu kings wanting to spend their final days along the sacred Ganges. Many of the remaining lofty old palaces bordering the ghats are now hotels with rooftop restaurants offering magnificent views.

We stayed in the old city with its narrow, winding labyrinth of alleys filled with people, cows, dogs, goats, motorcycles, bicycles, restaurants, hotels-everything animate & inanimate. So very easy to get disoriented & lost, but all alleys eventually lead to the ghats on the Ganges. Businesses thrive here, people live in cubby holes, excrement & garbage is everywhere, but despite all this it is one of the more interesting places we have visited. We were spellbound!

Colourful shamans/ priests & touts are everywhere offering blessings, drugs or massages for a cost with the reward of good Karma, of course. But it is the activity along the 84 ghats (steps leading down to the river) bordering the Mother Ganga, where the more interesting activity occurs. At any time during the day you can see people bathing, brushing teeth, washing clothes, dishes or cows, selling trinkets, doing yoga, playing cricket, or making offerings & ‘puga’ on the murky river’s edge.

Cremation occurs at a few of these ghats 24/7 with up to 300 bodies burned in a 24-hour period. Huge piles of wood are stacked along the riverbanks & walkways. This is quite the ritual & as morbid as it sounds, is quite fascinating. Corpses covered in saffron & gold cloth are carried on bamboo stretchers through the narrow alleys to the burning ghat by the ‘untouchables’ also know as Doms. This is so routine, crowds in the alleys barely move aside as the corpse is transported down to the riverbank.

Upon reaching the river, the body is doused in the Ganges before cremation for ‘spiritual cleansing’. A wood pyre is prepared, often on top of previous burnings, with each piece of wood weighed on giant scales to determine the cost of cremation & to ensure complete incineration of the corpse, apparently an art. The family of the deceased stay until the cremation is complete, about 3-hours. During this time the raging fire is tended by a Dom who ensures any body parts are tossed back into the fire for complete cremation. The final ritual occurs when a clay pot, filled with water from the Ganges, is ceremoniously thrown & broken on the remaining embers, by the family elder, signifying a break from this world & release of the deceased’s spirit. In the early morning you can see men scouring the cinders looking for any remnants of gold jewellery or fillings from the corpses.

We witnessed up to 7-cremations occurring simultaneously at the main burning ghat. The fires were hot, smoke burned our eyes & touts milled around offering to explain the process for a donation for those who couldn’t afford wood. All this action occurs in an almost a circus like atmosphere, with kids playing, cows, dogs & people milling around right beside the burning area & the many river boats drifting in for a better look. Oy vey! 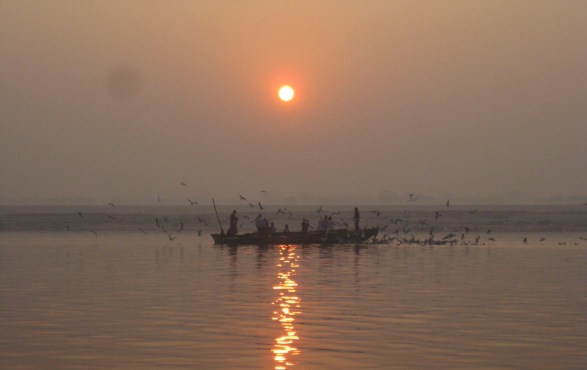 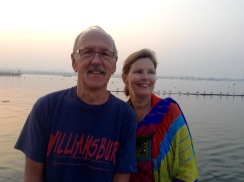 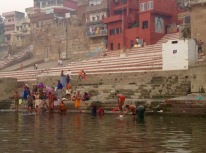 Riverside view of the burning ghat 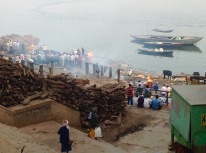 Despite all this, we did have time to take in a cooking class while in Varanasi learning to make samosas in the small home-based kitchen setting provided by Titu & Rashmi. Bob  was the photographer & scribe, recording the recipe & each step of the process. Titu was entertaining & very knowledgeable, but it was Rashmi who guided me, such a great teacher, ensuring the potatoe/pea based filling was appropriately spiced & patiently teaching the technique to ensure the stuffed dough stayed intact during cooking. Very time consuming, easier than it looks, similar to making pirogies, & certainly gave us a new appreciation of the prep that goes into these tasty morsels found on all the food carts. 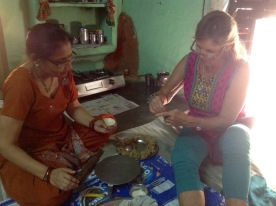 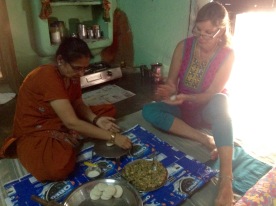 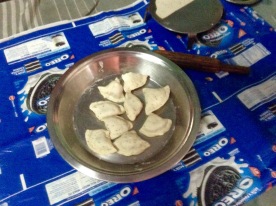 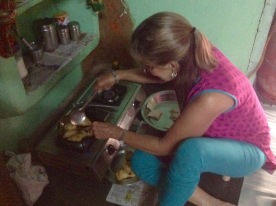 Next stop Agra & the crown jewel, the Taj Mahal.

Cellphone lesson (Pic for you Marlow) 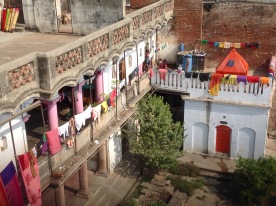 View from our rooftop

Waiting for the train to Agra