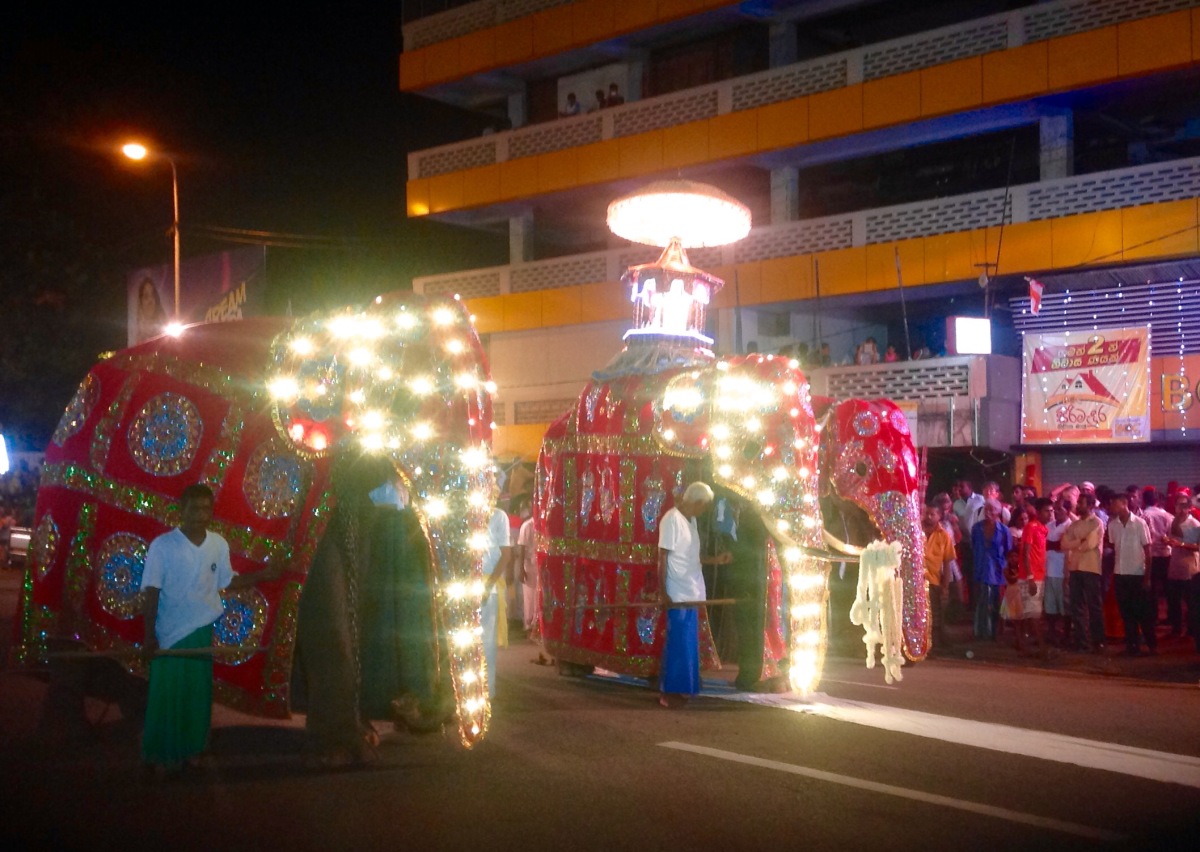 Nawam Maha Perahera is the most important religious Buddhist cultural pageant held in Sri Lanka that is celebrated once a year on the full moon day in February. Every full moon day or the “Poya Day”, as it is known in Lanka, coincides with an event of Buddhist religious significance. This particular event is a significant holiday in Colombo, the county’s capital, with thousands of people attending an evening pageant/parade over two successive days. Luck was with us, we would be just winding up our travels in Sri Lanka, so with a little pre-planning (surprise) we decided that we would head to Colombo for the festival. We were also quite fortunate to find a guest house only 5-minutes from the temple & festivities.

Arriving mid-afternoon on the first day of the pageant, we checked out the parade route, the elephants with their mahouts at a nearby park & the Gangaramaya Temple, located by picturesque Beira Lake, where it all begins. Thousands of chairs & viewing stands were set up along the route, starting at the temple & circling the lake. This promised to be a good one! A bit unnerving was the police & military presence, especially when we saw them checking out the various viewing stands & trees closer to the temple with sniffer dogs. The country’s president & prime minister would be attending the event this year, so everyone was on high alert. 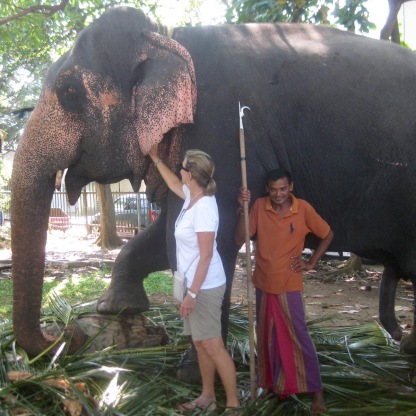 Anticipation grew as we watched people scurrying to find a good vantage point along the packed streets. Finally we hear the whip crackers, snapping their whips in the night air, the parade has begun. Dancers from various parts of the island (~5000) entertain the throng of spectators watching on the sidelines. Flag bearers lead each group followed by drummers, percussion bands, conch shell blowers, flautists & dancers in various ornate costumes & masks. The air was filled with sound, music & ancient chants. There were even stilt walkers & fire dancers, spinning balls of fire in the air with reckless abandon is an electrifying display. 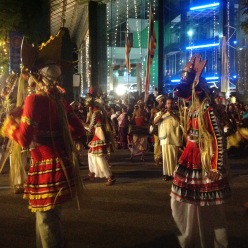 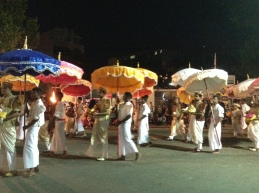 Carrying caskets of the four shrines 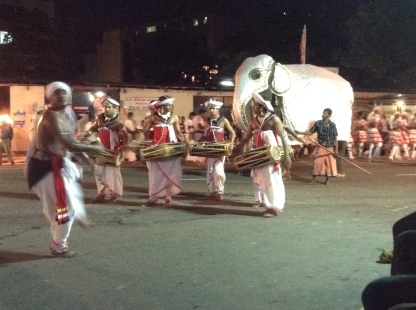 A serene procession of monks in their saffron robes is a distinctive feature of the Nawam Maha Perahera & adds to the spiritual aspect of the pageant. Several floats carrying Buddha statues made their way past the crowds with many people making cash offerings as they passed.

The climax of 2-hour procession is the elephants. Each of the pachyderms is resplendently adorned in rich draperies in vibrant hues of gold, red, green or blue. The tusker Nawam Raja takes the lead bearing the Sacred Relic Casket (holding a lock of Buddha’s hair apparently) & is flanked by other pachyderms lite up like Christmas trees.

Visiting Sri Lanka was an unexpected hiatus in our travel plans. Needless to say we really enjoyed the diversity this beautiful island country offers & the people who so warmly welcomed us.