Surprise, we have taken a little side trip to Sri Lanka! While idling away the days in Varkala we realized how close we were to Sri Lanka & always game to seize new opportunities we successfully obtained e-visas, tickets for the 1-hour flight & booked accommodation. We needed to do our homework quickly since this wasn’t on our radar at the beginning of our travels. We had no idea of where to go or what to see, however with some internet searches & an email to our globetrotting niece, we were convinced it was a great place to visit (thanks for the great info Jen!).

What a difference a few hours makes! Sri Lanka is much different from India, very clean, substantially hotter in some areas, relatively easy to get around & very diverse. Previously known as Ceylon, the country achieved independence in 1948 & was renamed Sri Lanka in 1972. As many of you no doubt know, Sri Lanka was engulfed in a bitter 30-year civil war between the government & Tamil Tigers, who were fighting for independence. The war ended bitterly in 2009, rebuilding is underway & it is becoming a popular tourist destination. The people speak freely about the strife this country has seen, voicing their thankfulness that the turmoil is now over & harmony has been attained.

We headed to Negambo, a fishing town, closer to the airport than the capital Colombo. The Lellama fish market is the second largest in Lanka & the place to bid on the catch of the day. We wandered the beach, watching the workers drying fish. Labour intensive, the men are paid an equivalent of $4.00 daily, women $3.00. 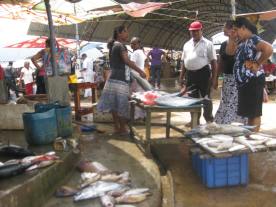 Kandy, the cultural centre of the island & UNESCO World Heritage site was the next stop. Riding the rails is the way to get around here, very inexpensive, (3-hour ride ~$1.60), providing outstanding scenery thorough the terraced hills with valleys far below. This was our home base for exploring some of the sights in the area. Kandy itself has many historical sites & has a man-made lake in the center of town.

We visited the Royal Botanical Gardens in Peradeniya, home to over 4000 species of plants including medicinal herbs, spices, orchids & many different types of trees, many unfamiliar to us. We were amazed at the thousands of bats hanging in the trees in one section of the gardens. They soared above us, screeching as they moved from tree to tree. We were also entertained by the hundreds of monkeys scouring the ground searching for food. A great way to pass the afternoon, avoiding the heat & crowds. The Chinese New Year has brought a wave of Chinese tourists to the island, need we say more! 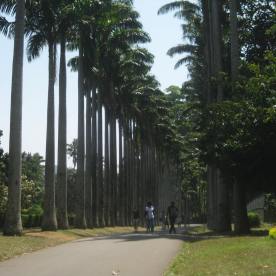 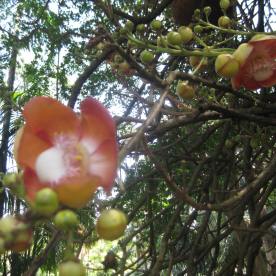 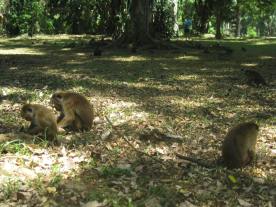 “The ancient city of Sigirigia” (Sigirigia means Lion) in central Sri Lanka, is famous for its over 200m high red stone fortress & palace ruins. A UNESCO site, was once a Buddhist monastery & later a king’s palace. The most significant feature are the apsaras paintings on the walls about 100m up. These frescos are the earliest surviving pictorial art of Lanka. Unfortunately photos weren’t allowed, but believe us they are beautiful. In case you had any doubts, we made the long winding climb up this huge rock, in the heat of the day, with the thousands of other tourists. It was definitely worth it though, the 360 vista was beautiful.

View from the top 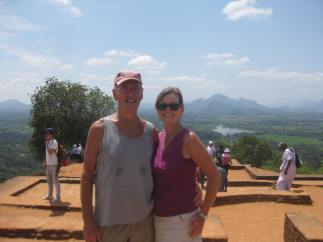 Not far from Sigirigia is Dambulla, yet another UNESCO site. A giant golden Buddha marks the pathway rising 160m over the surrounding plains. The 5-caves have the best preserved frescos & statues in Lanka with over 153 statues of Buddha alone. The large recumbent Buddha is carved out of the rock & measures 14m. We were amazed at the detail in the paintings, some over 2000 years old, that covered every square inch of each cave’s walls & ceilings. The paints apparently depict Buddhist mythology & tales of Buddha’s previous births. Plant extracts from the indigenous plants provided the marvellous colours. We certainly earned our Lion beer after all the climbing that day! 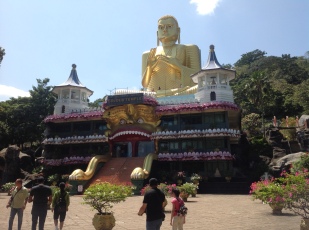 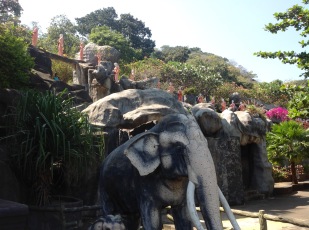 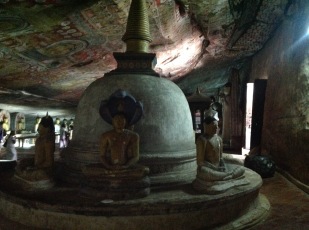 Dead Buddha’s foot (one toe shorter than the others)

We are heading to hill country next by train with apparently the best views yet.

8 thoughts on “Welcome to Sri Lanka!”