It’s official, I am a self-professed monk stalker! We have visited several temples in the past couple of days & have come across several monks of various ages & gender. The first were at the Long Son Pagoda. 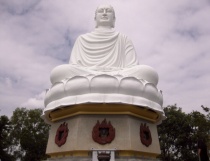 This temple, founded in the 19th century, is the headquarters of the Buddhist Association in Khánh Hòa province. Climbing over 150 steps from the Long Son Pagoda, the Hai Duc Pagoda sits along the crest of the hill, where there is a large white concrete statue of Gautama or sitting Budda & another

large reclining statue called appropriately, sleeping Budda. The area serves as a vantage point looking over the city & the former statue is a major landmark. This guy is huge; from the ground up, he is 24 m high with the base 21 m wide. The temple grounds include lush gardens & roofs decorated with dragon mosaics which are built from glass and ceramic tiles. The main ceremonial hall is adorned with modern interpretations of classical motifs. The nasal hairs of the dragons are wrapped around the pillars on either side of the main altar.

We continued on with our self-directed walking tour of Nha Trang & found some other temples, which interestingly had no other tourists. One had several very young boys, perhaps orphans taken in? They were very friendly but didn’t speak English so we weren’t able to get their story. Regardless they invited us to join them for lunch, which we graciously declined.

Next up was the Po Nagar Cham Towers, built between the 7th & 12th centuries was used by

Hindus for worship. Originally there were 7 or 8 towers with 4 remaining today. Again we did some hill climbing to reach the site only to be rewarded with a magnificent view of the harbour & city below. Cham, the ethnic Chinese & Vietnamese Buddhists still come to Po Nagar to pray & make offerings.

Nha Tho Nui Cathedral serves the surprisingly large Roman Catholic population. While it might not have the majesty of its European counterparts, it nonetheless dominates the hill in the center of Nha Trang & features quite beautiful stained glass windows & statues of various saints along the walkway leading to the church.

Having walked what seemed like 20K we came across the Nha Trang General Hospital. Curious to see what the healthcare system was like we entered the hospital & were approached by a woman. When I explained I was nurse in Canada & interested in the hospital, she lead us to a room where a man appeared to be giving orders to a couple of nurses. He told me quite sternly to sit, several times, so I obediently slid into a chair waiting for him to finish his business. It turned out he was the head of Cardiology & gave us a brief tour. Some things never change, regardless of the country you live in, the waiting rooms were overflowing.